These cards were distributed by Edwards Ringer & Bigg, a British tobacco company under the Imperial Tobacco firm. They created these cards for use in their tobacco products.

The set featured movie stars and is mostly a non-sports set. Fronts pictured the subject and the backs implored collectors to smoke one of Edwards, Ringer, and Bigg’s cigarettes, Exmoor Hunt, Red Bloom, and Klondyke.

Chaplin’s was an English comic actor, filmmaker, and composer who rose to fame in the era of silent film. He became a worldwide icon through his screen persona, “The Tramp“, and is considered one of the most important figures in the history of the film industry. His career spanned more than 75 years, from childhood in the Victorian era until a year before his death in 1977, and encompassed both adulation and controversy.

A beautiful card in exceptional condition of one of Hollyood’s greats. 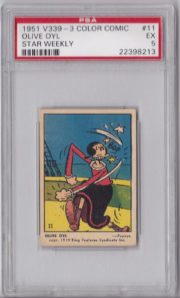