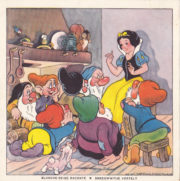 Offered in the listing is a rare Promotional Trading card giveaway issued in France to promote Cadum Savon Soap.  These beautiful  illustrated series consisted of 15 cards depicting Snow White and each of her Seven Dwarves … Read More