This listing is for a rare vintage Trading card of Dr. Sivana The arch enemy of Captain marvel from the Golden Age of Comics.  Issued in 1949 by the Company FHER, it’s one of the earliest known trading card of this enduring comic book series that exist still today but under the DC brand..  This vintage trading card series showcased Captain Marvel, Mary Marvel, & Captain marvel Jr.  Along with the Marvel Family the series also included Dr. Sivana ad his own diabolical family.

The original series consisted of 144 cards and told the tale of Captain marvel and the Marvel family’s origins along with a very early clash with the sinister Dr Sivana.  This is the earliest known series of cards issued with the approval of Fawcett during the Golden Age period of the 40’s.   The card still shows great color registration, clear text on back and very good corners.  There is aging that can be detected on the back (see scan) but overall still has great eye appeal. Great addition to any golden age collection or fan of Captain Marvel The World’s Mightiest Mortal.

Disney fans will be very excited with this new Pre-War Disney Find from Italy. The Premium Redemption Giveaway Trading Card Series from 1936 Topolino Elah! This listing is Card #5  Horace Horsecollar (Orazio in Italian) from this rare Collection!   The … Read More 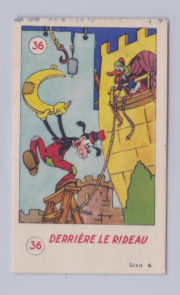