The 1966 Lyons Maid Famous People Trading card #42 of Walt Disney card comes from an original series that consisted of 48 standard size Original Trade Cards measuring 1 3/8″ x 2 11/16″. It was issued by Lyons Maid House Company in 1966 on the subject of Famous People. The drawings contain a portrait of the person and a background to suit their famous achievements. 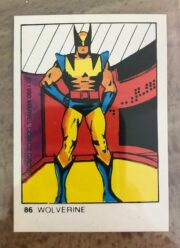