This set of 36 standard-sized cards was issued in limited quantities, rumors being that only 2,000 complete sets were ever produced. The cards were initially released in cellophane-wrapped complete sets for $5.00 per set. This style of packaging had a tendency to damage card corners, making high-grade examples a challenge to locate. Card fronts featured solid colored borders with a color image of the wrestler, while standard biographical information can be found on the reverse. Many of the top wrestlers of the day are featured, with the cards from this set being considered their rookie cards.

Many consider this the 1986 Fleer Basketball set of wrestling cards.

“It’s really the first vintage wrestling set that was produced on card stock in America.”

The horizontal backs of these cards come in two different colors depending on the series: Series A comes with a Blue back while Series B has a Orange back. After that, the backs are identical; they exhibit the card number, wrestler’s name and hometown at the top, followed by their biographical information. The bio often describes the titles the wrestler has held, their major ring rivals and their signature moves.

The only way these series could initially be purchased was as full cellophane wrapped sets via mail order through an ad in the Wrestling News or Wrestling Revue magazines. Each series could be purchased for $5, including shipping to anywhere in the world.

Some estimates placed the original production run initially at about 2,000 sets of each series, but further research indicated the number could be as low as 500.

In order to obtain this rare series you had to order them, so it wasn’t available at your local grocery to purchase.

Here’s an extensive breakdown of Series B:

Though it doesn’t have the star power of Series A, Series B does boast the first singles of several popular wrestlers.

Rick Martel is pictured on the first card in this series, and it’s also the most elusive card in PSA NM-MT 8 or above in either series. Another elusive Series B single to track down in flawless form is the Kerry Von Erich (#7). This orange-bordered card is regularly uncovered with corner damage, poor top-to-bottom centering and print issues near the top. When opening Series B sealed sets, this card was second from the top, a position that made it more vulnerable to condition woes. It was also located on the right edge of the print sheet, just below the Martel card. Of the 59 submitted, there has been one PSA 10 and two PSA 9s.

One of the most recognizable names from Series B is Jesse Ventura (#20).

“That’s a popular card, but he’s not quite in the stratosphere of the Hogan, Flair and Andre the Giant cards,”

The most elusive card in this series in PSA 9 is the Ray Stevens (#24) (see accompanying chart). This card is the first card on the left in the fourth row of the print sheet, a position that often makes cards susceptible to flaws. Its green borders also chip very easily.

PSA 8 is a strong grade for cards from either series and that high-grade examples are hard to uncover, even straight out of sealed sets. Grading and the average grade he received for his cards was right around PSA EX-MT 6.

On top of the colored borders being easily chipped, many of the cards are hampered by print flaws.

“There are so many different print issues with the set,” “These cards were not made to be scrutinized on a scale of one to 10. It was a total mom-and-pop organization [that produced them].”

The death of high-grade 1982 Wrestling All Stars cards is one of the reasons that prices for them have increased in recent years, but with a low print run, these cards have become difficult to find in any grade.

Condition of this Rookie card of  Ernie Ladd is Near Mint/Mint(see scan).  It has clean front and back cardstock with vibrant color on both sides and bold text as well. Great eye appeal for this classic 37 year old find. 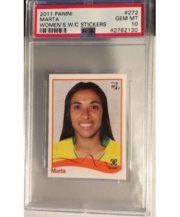 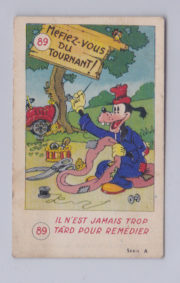 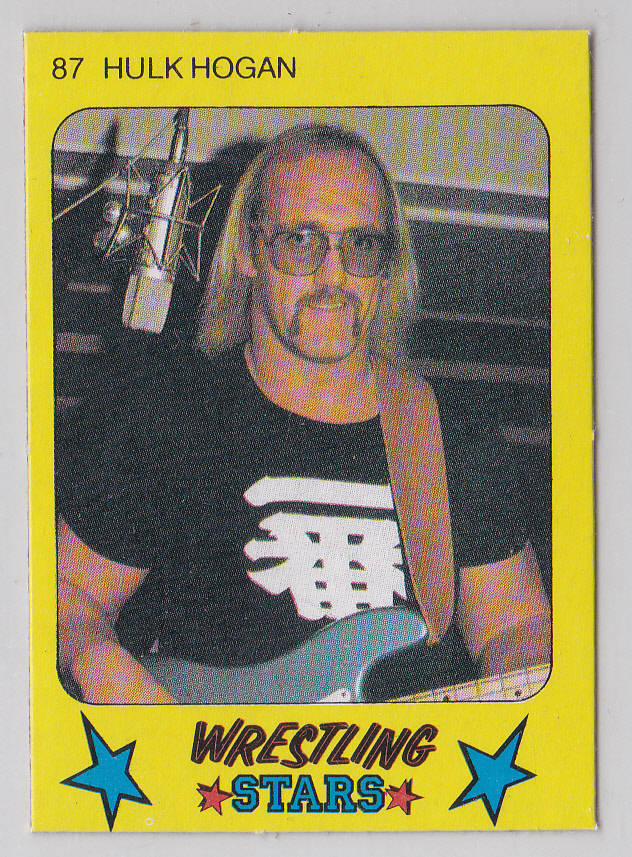