The advent of Olympic cards can be traced back to the turn of the century.  While these are not the first Olympic cards, the 1910 Mecca Cigarettes Champions (T218) series does deserve a strong mention with its impressive 153 card series.  While it was composed of both Champion Athletes and Prize Fighters, it was and still is one of the nicest examples of its time period. 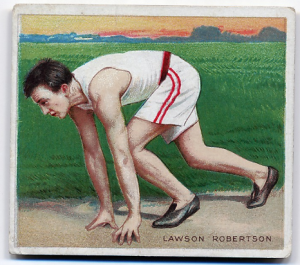 The Olympic portion of this series was composed of 62 Track & Field and Swim stars from that time period.  The cards themselves measured 2-1/2” x 2-7/8” with Mecca brand advertising on the back of most of the cards issued. There were some variant issues that existed as well produced at the time by both Hassan and Tolstoi branding on the backs.  Interest in these early issues are in big demand by modern day collectors both for their historical significance and afford cost in contrast to other sport venues of the time like Baseball. In fact you could probably pickup an incredible turn of the century Olympic collection for a fraction of what you might pay for say an early T206 single key issue.  This said, it should be noted that some early key issues for such Olympic legends like Jesse Owens, can command a sizable price tag of 300.00 and higher in contrast to other stars of his day. 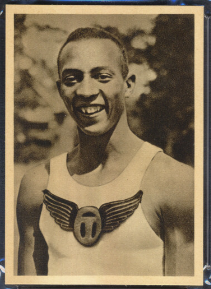 The art of collecting Olympic cards is truly a past time in its own right.  With its array of countries, sport venues, and stars, it’s easy to get caught up in just one discipline like say Gymnastics or just Track & field or even just one star!  Trust me I’ve known collectors that spend their every waking moment trying to collect all that exist of just one athlete.  For a venue that comes out just once every 4 years, it’s an astounding feat to be able to amass this type of focused collection.  We tend to call this type of collecting Star Centric.  It’s a discipline that exist even today, can I get a show of hands of MJ collectors?  MJ for those not familiar with the initials is short for Michael Jordan from the Chicago Bulls. He was one of the most popular Athletes of his day from a collecting stand point.  I’ve deviated, back to the Olympics, Collecting Olympic issues is a new nitch that continues to grow in popularity especially with the emergence of such new modern day stars like Mary Lou Retton (Gymnastics), Michael Phelps (Swimming), Carl Lewis (Track & Field), Nadia Comaneci (Gymnastics), Mark Spitz (Swimming), Usain Bolt (Track & Field), Gabby Douglas  and so many other legends.

Each Medal won represents a person with a story, a dream, who through it all accomplished the incredible and in some magical moments the perceived impossible.  They serve to inspire us and remind us that anything is possible if you put all your heart, mind and soul into something.  As collectors we can relive each historical moment, over and over again with each new acquisition we add to our own collection.  We are the curators of this rich past time and its legacy, perfectly preserved on card board.  So as each new Olympic returns, so do us the collectors of this genre, ready to pick out tomorrow’s gems from the array of new future hopefuls that might one day leave their mark in the record books for their respective sport.

In relation to this week’s set highlight, it originates from Australia.  It’s funny I just wrote a story not that long ago on another Australian Series from 1964 the Heinz Veb Egg Olympic Games.   This series has its own special place in that unlike many issues that either came out of some type of food group or cigarette pack, this series was given away as a promotional Olympic tribute collection via “The Daily Telegraph Mirror Newspaper”.  The series was titled “The Great Olympians” a wonderful tribute to some of the legends of the past.   Being its distribution was a limited one, finding original intact sheets today is a bit of a challenge.  The collection consisted of 12 legends from the past offered in strips 4 cards each.

The A list of Hall of Famers consisted of:

It should be noted many of the stars mentioned above were of Australian origin, no surprise they would be prominently included in this series.  This is what would be termed as National Pride!  Another interesting point I hope to devote more time to in a future article will be relating to Cassius Clay, AKA Muhammad Ali.  Though he was one of our countries greats Olympic and Overall Sport Legends, of his day, he was poorly represented by most of the American card companies of his day.  I would have to say this was partly due to the limited interested that existed at that time for either Boxing or Olympic type trade cards.  The focus here in the states was to focus more on the big 4 sports (Baseball, Basketball, Football, Hockey).

Turn the clock forward to 2013, and now we see the complete opposite.  Collectors are now spending hundreds of dollars for his early boxing and Olympic issues from other Countries Multi-sport card series. This is part of this particular series lure, it’s one of Cassius Clay’s Scarce Olympic Card finds.   Currently PSA, Professional Sports Authenticators has only a total of 14 examples ever graded.  When you considered how many were probably distributed, and the time frame in which they would have been available to the average consumer (only in Australia), it’s actually quite a small number.  On average most modern day production numbers for card series range in the thousands!

Add to this set, the “Perfect 10” Athlete Legend Nadia Comaneci and Track & Field Phenom Carl Lewis, and you have a modern day Olympic series that should not be missed.