As an avid comic collector in the 70’s & 80’s it was no surprise that my hunger for superhero adventures would eventually lead me to the footsteps of Fawcett Publication’s The Big Red Cheese or as most fondly recall this golden age Superhero under his better known moniker of Captain Marvel The World’s Mightiest Mortal.

Most modern day collectors associate this name with Marvel’s 1960’s version who would later be revised several times in Marvel’s main shared universe, known as the Marvel Universe.  In the Marvel Cinematic Universe, Captain Marvel is Carol Danvers, portrayed by Brie Larson. 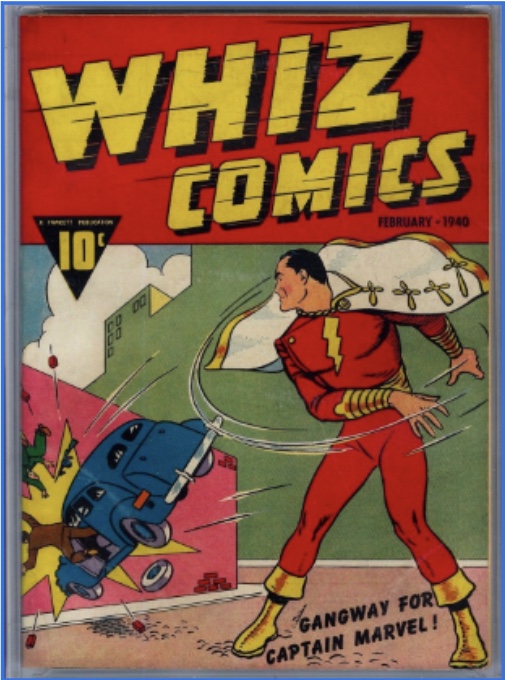 The true original Superhero to own this name and the rightful heir has an incredible origin and legacy that was created and nurtured by artist and creator C. C. Beck and writer Bill Parker in 1939. This Captain Marvel first appeared in Whiz Comics #2 (cover-dated Feb. 1940), published by Fawcett Comics. He was the alter ego of Billy Batson, a boy who, by speaking the magic word “SHAZAM!” (acronym of six “immortal elders”: Solomon, Hercules, Atlas, Zeus, Achilles, and Mercury), could transform himself into a costumed adult with the powers of superhuman strength, speed, flight and other abilities. The character battles an extensive rogues’ gallery, most of them working in tandem as the Monster Society of Evil, including primary archenemies Doctor Sivana, Black Adam, and Mister Mind served to separate this hero from the pack back then this included his biggest competition at the time from D.C. Publications, Superman! 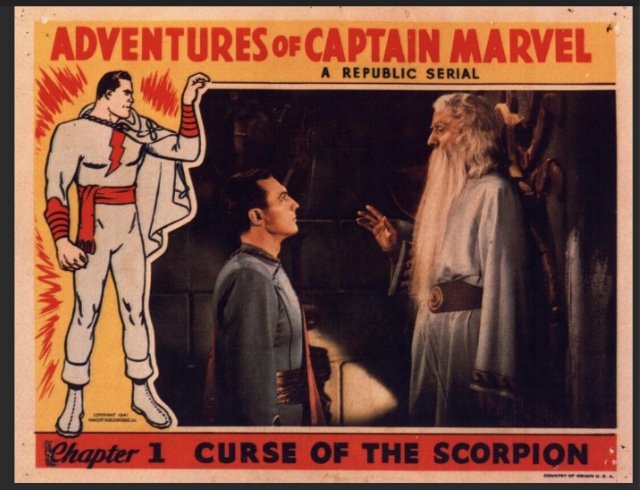 Why was this character so endearing in contrast to say Superman back then? Well there was a certain amount of charming innocence present in most of the stories of  Captian Marvel in contrast to his rival Superman in Action Comics.  Superman under the guise of Clark Kent was already an adult at the start of the series dealing with adult issues like holding a job, hiding his identity and fighting crime while Captain Marvel’s alter ego Billy Batson was a young kid.

While kids could always dream of being Superman, with Captain Marvel, they could really view the concept of what it really meant to be a superhero through the eyes of another kid who was actually going through these same realities!

This point was wonderfully showcased in the 2019 New Line Cinema Movie adaptation titled Shazam played by Zachary Levi. The plot follows teenager Billy Batson as he is chosen by the ancient wizard Shazam  to be his new champion, allowing him to transform into an adult superhero (Levi) with various superpowers. Billy and his foster brother Freddy Freeman must discover Billy’s new powers in order to stop the evil Dr. Thaddeus Sivana and the Seven Deadly Sins.

This light hearted comedy brought back the qualities that fans of the original golden age comic fans loved about the series.  Zachary Levi  and his younger counter part in the movie Jackson Bostman made us believe in the magical possibility that a 14-year-old could turn into Earth’s Mighest Hero simply by shouting  out one word Shazam to transform into a superhero.  In the movie Levi wonderfully shows that kid like innocent reveling  in the new version of himself by doing what any other teen would do — have fun while testing out his newfound powers.

The concept originally created by C.C, Beck in Fawcett Publications Whiz Comics brought to life the idea that a regular kid with no special abilities, could become something incredible.  He wasn’t brought over via a spacecraft from another planet with an advanced race.  He was a regular kid just trying to figure out his role and purpose but who at his core was a good kid, with a good heart.

So how does this get us to the discussion of trading cards?  Ah Hah! I thought you would never ask!   Well even though Captain Marvel was doing well in print, no one ever thought to take that popularity to the trading card arena.  So is the story done?  Not by a long shot!  So this is where my own personal experiences come into play.   Being an avid overseas collector of trading cards, it was a big surprise when I discovered pretty much by chance about a decade ago that cards had been made of our Big Red Cheese!

The interesting aspect was it wasn’t produced here in the states like the Superman Gum cards of 1940.  The issue was produced abroad via the permission of Fawcett Publications in Spain. 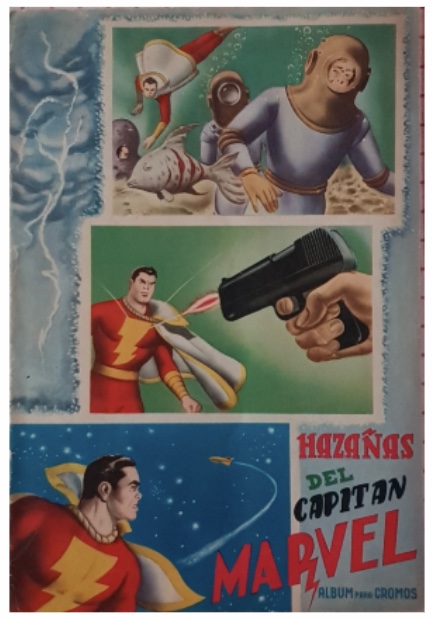 Fher was a Spanish publishing house that was  located in Bilbao, Spain and was dedicated to the production of sticker albums, books, cut-out dolls, comics and die-cuts, most of them destined for children and young people from about 1940 thru 1985.

The company was founded by the brothers Germán and José Fuentes Lizaur in Bilbao in 1937. Hence the acronym, Fher, which means “Fuentes Hermanos” (Brothers Fuentes).

Unlike most publishing companies at the time, The Fuentes brothers were smart business men.   They understood in order to publish the characters kids wanted to see and collect, they would need to obtain permission from the companies that had the greatest fan appeal.  Some of the card series they were able to reproduce with permission were quite frankly amazing.

Some of the business savvy acquisitions at the time were:

This from a company that up to 15 years ago I had never heard of, was honestly pretty impressive and shocking at the same time.  What makes the Fher Series from 1949 so special was that unlike some picture cards that simply showcase the star in random scenes with no real imagination, or story plot, this series started from the beginning.

Starting with Card #1 We see the story begin with an image of the Wizard Shazam in his fortress contemplating the events that will come to pass with his eventual meeting with Billy Batson. 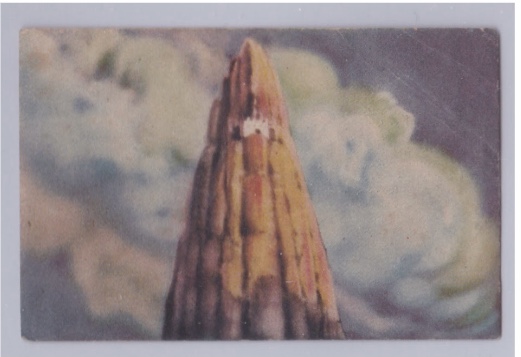 From there the cards beautifully retell the story of his origin, Billy Batson, a homeless newsboy, is led by a mysterious stranger to a secret subway tunnel. An odd subway car with no visible driver takes them to an underground tunnel with seven statues depicting the Seven Deadly Enemies of Man, the lair of the wizard Shazam. 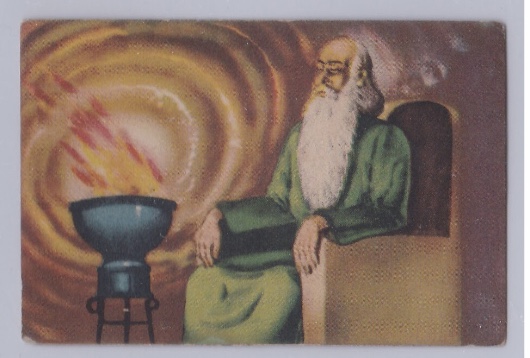 The wizard shows that he has observed the hardship of Billy’s life, and grants him the power to become the adult superhero Captain Marvel, just before a stone suspended above Shazam’s head crushes him. His ghost says he will give advice when a brazier is lighted. 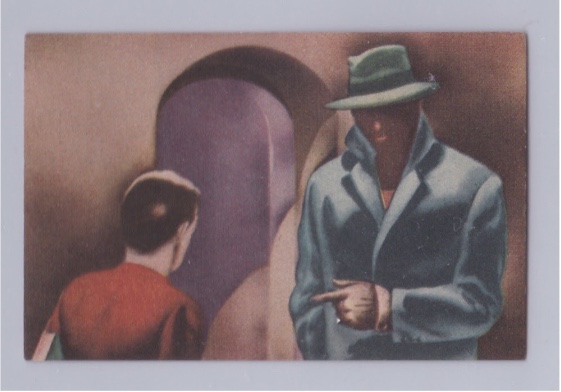 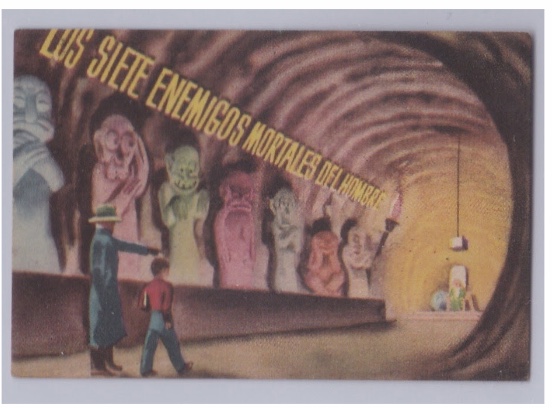 In order to transform into Captain Marvel, Billy must speak the wizard’s name, an acronym for the six legendary figures who agreed to grant aspects of themselves to a willing subject: the wisdom of Solomon, the strength of Hercules, the stamina of Atlas, the power of Zeus, the courage of Achilles, and the speed of Mercury. Speaking the word produces a bolt of magic lightning which transforms Billy into Captain Marvel. Speaking the word again reverses the transformation with another bolt of lightning. 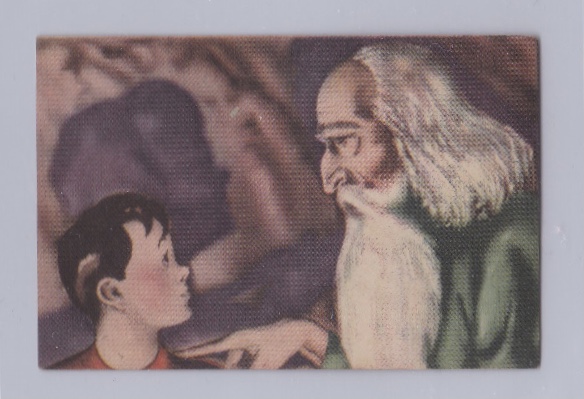 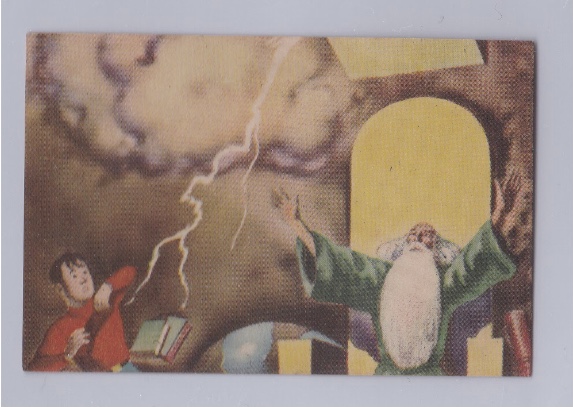 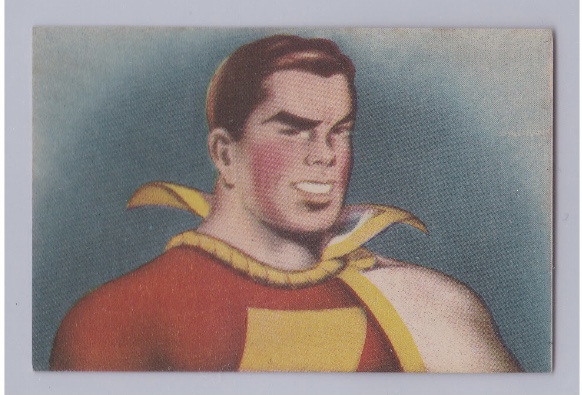 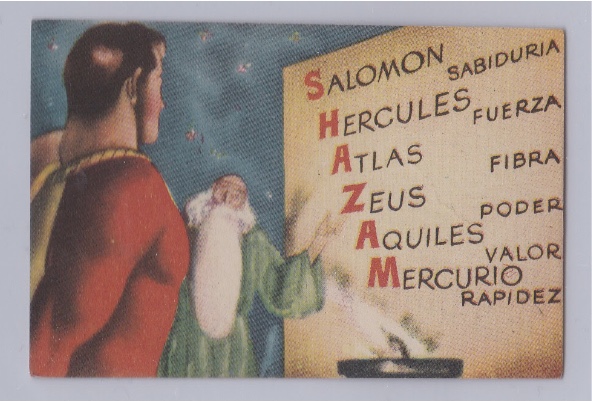 Through his adventures, Captain Marvel soon gains a host of enemies. His most frequent foe of course is showcased in this early vintage series Doctor Sivana, a mad scientist who was determined to rule the world, yet as we know from the comics will ultimately be thwarted by Captain Marvel time and time again. 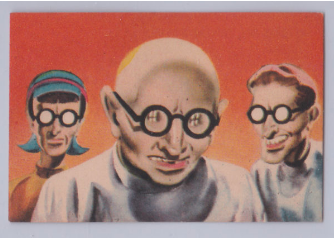 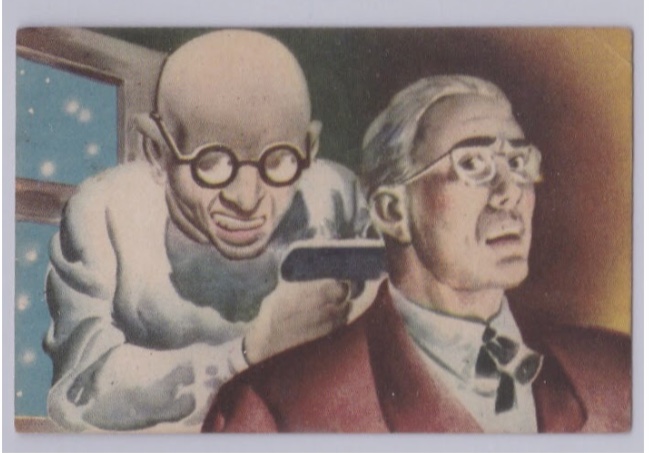 This rare vintage  series truly paid homage to one of the greatest of the Golden age era. No stone is left untouched in the Fher brothers retelling of this great heroes origins and wonderful cast of characters.  Heroes & villains are both showcased in this trading card treasure. It even includes Silvana’s evil children!

Thankfully Billy is not alone though as the card series also includes the other Marvel cast: Mary marvel & Captain Marvel Jr. in the storyline that wonderfully weaves the tale over the course of 144 beautifully illustrated cards. 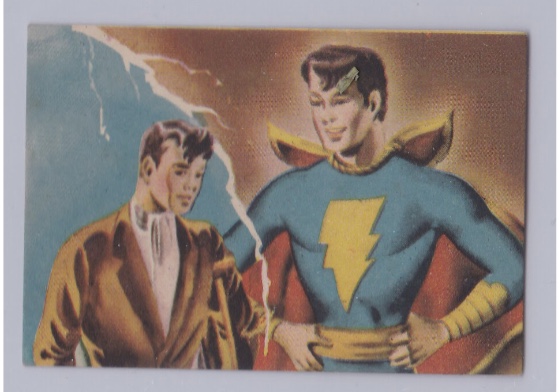 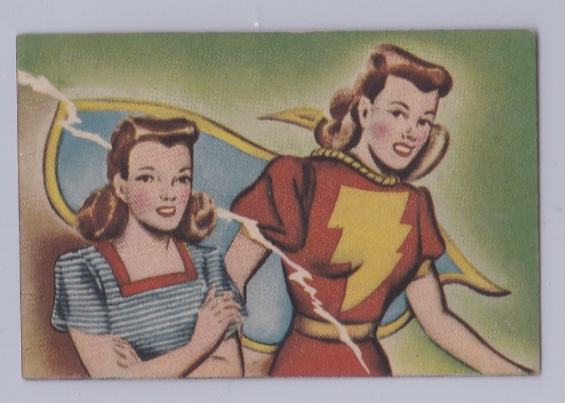 The manufacturer also provided an album to house the cards which was typical of most sets made by them.  Albums as a whole have traditionally been the way to house most card sets both in Spain and throughout Europe. By glueing the cards you instantly have. Great way to review the collection as a whole and in the case of story based cards change the card set into a virtual comic book of sorts. 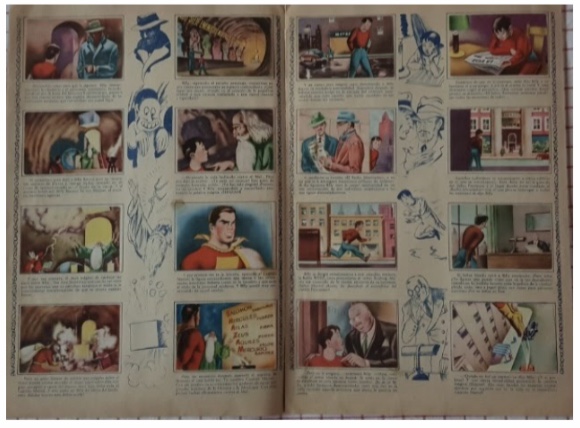 If you’re  a superhero fan, card collector or comic book buff, then this vintage find is a must have to add to your collection!

Prices for this series found glued in the album can average between 200-300 depending on condition.  If your looking to piece together the original cards in an unglued state the overall price tag could be substantially more as cards in this state are rare.

Anticipate individual cards selling in the 5-10  range each for low grade examples that potentially have back damage from being removed from an album.  High grade examples are rare due to the card stock used in this series as such examples in this state could run upwards of  15-30 each depending on state and image reflected on the card.

Compiling a complete original collection of all 144 cards in an unglued state would be a great accomplishment given its age of  71 year and the archival and preservation habits of collectors back then.

Hakes Americana actually sold an old used album back in July 2019 (with no cards) for about 175.00 dollars.  At the time their description read “Rare find & first we’ve ever offered in our 52 years.  Even rarer as unused, as most were partially filled by children in those times”.  Anyone familiar with Hakes knows this statement is a true statement as this auction site has seen it all at one point or another.

The series also got a little love from a new Abrams ComicArts book by the prestigious team of Chip Kidd and Geoff Spear. Titled “Shazam! The Golden Age of the World’s Mightiest Mortal”. 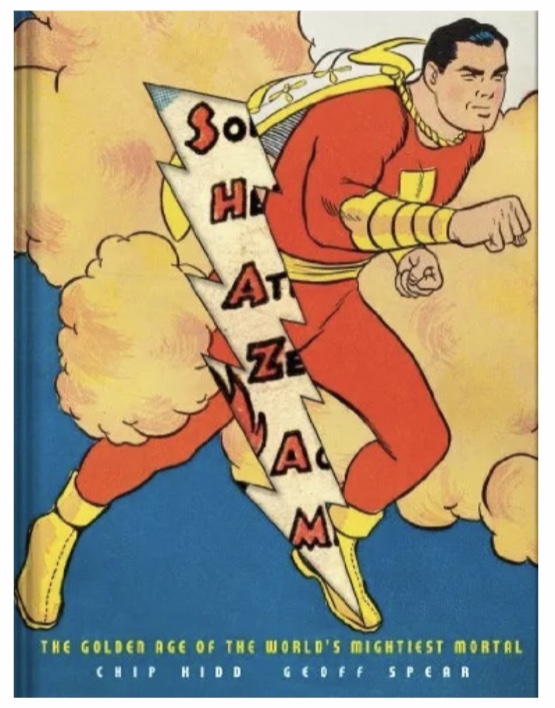 The tome offers an exciting bevy of nostalgic feelings by showcasing the beautiful comics, artwork, mementos and goods that were produced during the Marvel family’s time at Fawcett, from 1940 through 1953.  Chip a hardcore fan himself touched on the series in one of the illustrations showcased in the book.

The 1949 Fher Hazanas Del Capitan Marvel (The Feats of Captain Marvel) is a trip down memory lane of a superhero who dominated the comic landscape from the 1940’s thru 1950’s.   It reflect as most things do at times,  of a simpler time when all one needed was a a snack, a stack of comics and an unlimited amount of imagination and the willingness to simply say SHAZAM! and enjoy the sweet pleasures of what it means to be a kid footloose & fancy free..

This is Tomorrow’s Gems, signing out.