I think a large population of hobbyist can fondly attest to  the influence that Disney has had in their lives and in the lives of their loved ones.  Disney is both Multi-Cultural and Generational, few influences in life can make this claim.  This year the house of Disney will celebrate 85 years of story telling that started with Disney’s earliest works of Mickey Mouse stemming back to may 15th 1928 with the silent film test screening of “Plane Crazy”. 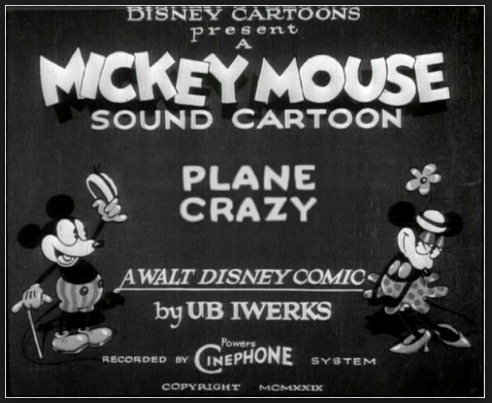 This along with other later release like “Steam Boat Willie” would cement Disney’s mark as a true innovator in the animation industry during those early days.  It’s fitting that currently on Ebay there is an incredible find associated with this classic Movie release.  The collection currently being offered is by Dealer/Collector Tomas Nilsson.  His incredible find from Norway all of which are currently graded by PSA (Professional Sports Authenticators) consist of the complete run of 102 early Cigarette Tobacco issues measuring 2 1-2” X 1/7/8” by the Norwegian Company J.L. Tiedmanns (now also known as T365-750 from Volume II of the World Tobacco Issues index).  This documented find is registered with The Cartophilic Society of Great Britain.  This incredible collection composed of 4 individual series: 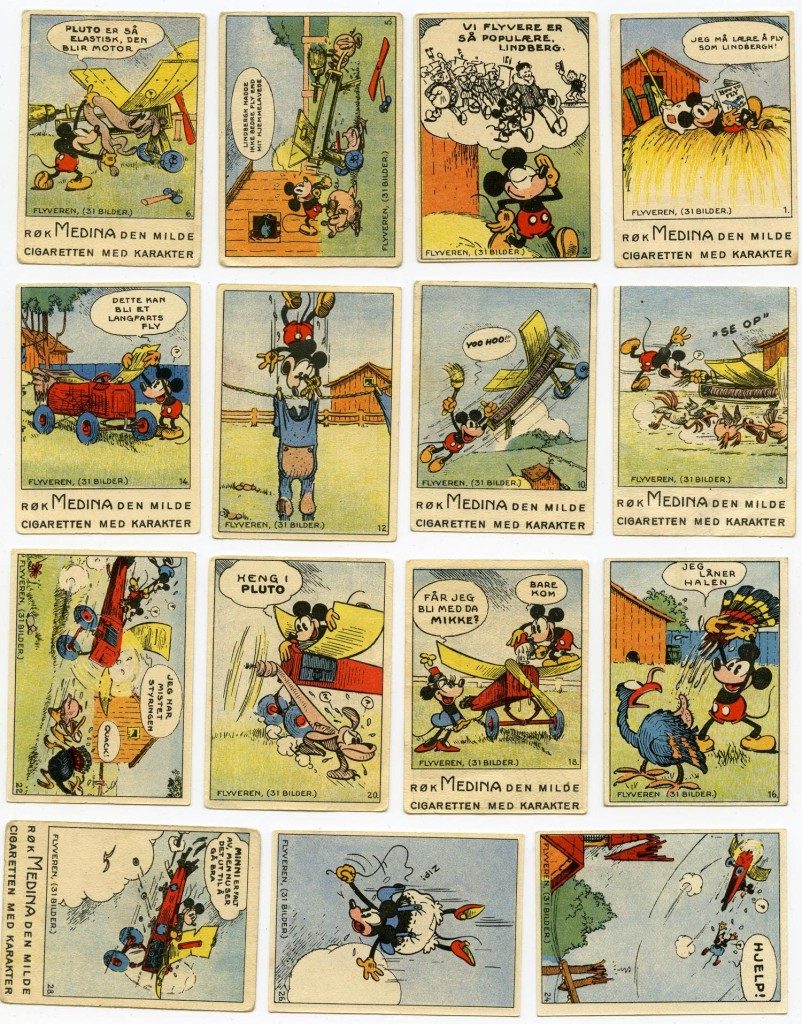 The write up confirms the series issue date of 1932, this de-throne’s the  current fan favorite classic Domestic Card Series R89 1935 Gum Inc Mickey Mouse Card Series by 3 years.  Mr Nilsson isn’t the only collector though to have found these rare cards, there is another collector local to Norway, Mr. Einar Okland who has also had the incredible fortune to locate these early precious treasures.  In the interview Mr. Okland shared of other famous character’s that graced the Cigarette landscape that was J.L Tiedman and other Similar trade Cigarette manufacturers like Cromwell Cigarettes (Other lines of cigrarette brands that existed in Norway during that period of time when these earlier Mickey Cards were made).  The popularity of these other stars rivaled even Mickey Mouse at that time.  Some of the characters  mentioned by Mr. Okland were  Felix The Cat, and Little Ophan Annie! 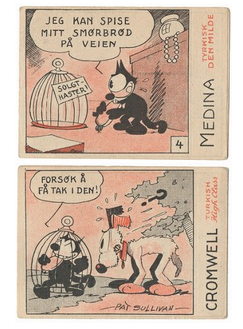 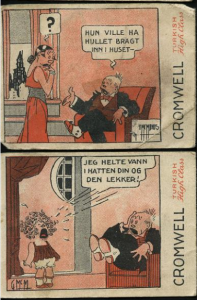 This is not to take away from this rare early series but to lay a little more Global back drop to the time period and the incredible offers that existed back then for collectors in Norway.  Mr. Nilsson’s collection of J.L. Tiedmann Mickey Mouse cards though is truly an incredible feat that should be applauded and as one collector to another, encouraged.  Feats like this serve to only emphasize the opportunities that we all have to find truly unique and as in his case, historical finds of importance.  While the baton is for now in the hands of the 1932 J.L. Tiedmann Series, I would like to bring exposure to other rare finds from that time period that might one day lead to a Mano a Mano contest for earliest known Mickey Mouse Card series!

May I introduce to you in this corner for your consideration from Italy:

[Mickey and The Lochness Monster]

This series while more than not an unauthorized series, is by most Italian historians and Advanced collector’s account the true earliest issue produced around that time period. Some estimate the time period some where between 1928 and 1930 by legendary  Artist John Bissietta who drew the series,  its consisted of 27 figurines (cards) called “Mickey and the Loch Ness Monster”, where it was told through pictures and captions.  This early adventure series tells of Mickey Mouse’s fascinated journey to capture the legendary sea monster, The Lochness Monster.  The series were produced in two editions: the first, of which we know only one complete collection in Italy, and a second, which today, shall we say, is a correction of the previous edition. They are probably the rarest Disney figurines in Italy.  The differences between the two series is that the first one had the signature of the creator, John Bissietta, printed in reverse with written captions a in red, and not black as in the second Edition on the back side of these rare issues.  An early article of this rare series was produced by the magazine Eureka to commemorate Mr. Bissietta’s legacy of work during that Pre-War time period.

Italy isn’t the only country that can lay claim to having in their collecting History early works of Disney Trading Cards.  The next candidate’s presented for your consideration from the Land of spain:

[Mickey and The Haunted House] 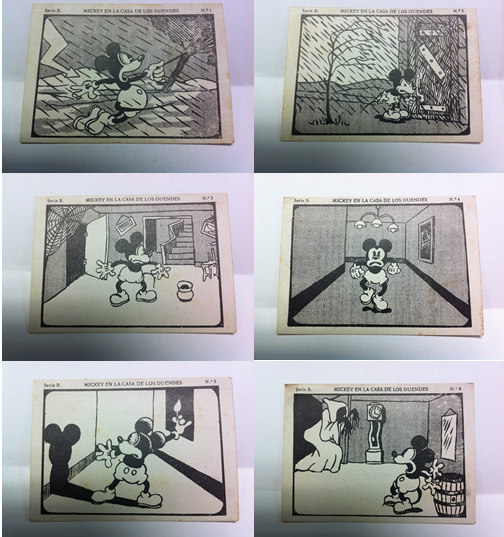 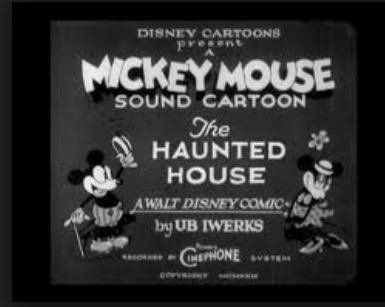 Spain didn’t stop there as the popularity of Mickey earned him another appearance in 1930 by another rare Chocolate maker’s Series:

This rare color series consisted of 15 Premium Candy card  inserts that tells the story of Mickey Mouse’s Adventurer as a stowaway on a ship that ultimately runs into danger when the crew is attacked by Head Hunting Cannibals.  Mickey saves the day though and goes from being chased by the Captain and his crew to be the Ships Savior.  It’s a great take on many of the popular stories that were being told at the time were Mickey is in a similar circumstance of peril.  The art work is done by Spain Art Legend Moreno.  This series like the J.L. Tiedmann Cigarette Series would also be released by other Chocolate makers at the time like Chocolates Nogueroles. 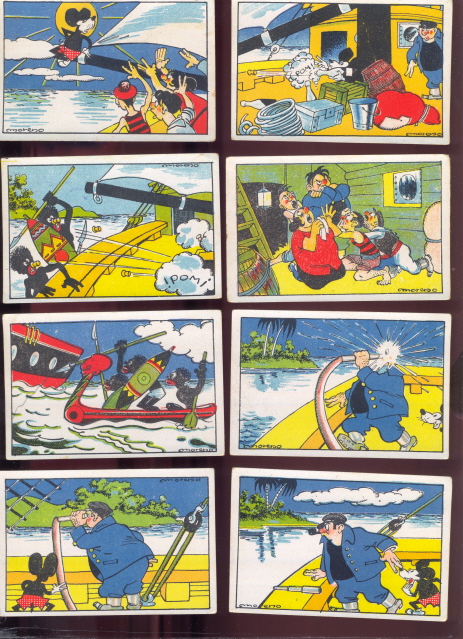 This next contender is more mysterious its origins are for not as well defined as the rest but from a rarity stand point measures well pound for pound with J.L. Tiedmann, for your consideration in this corner we present: 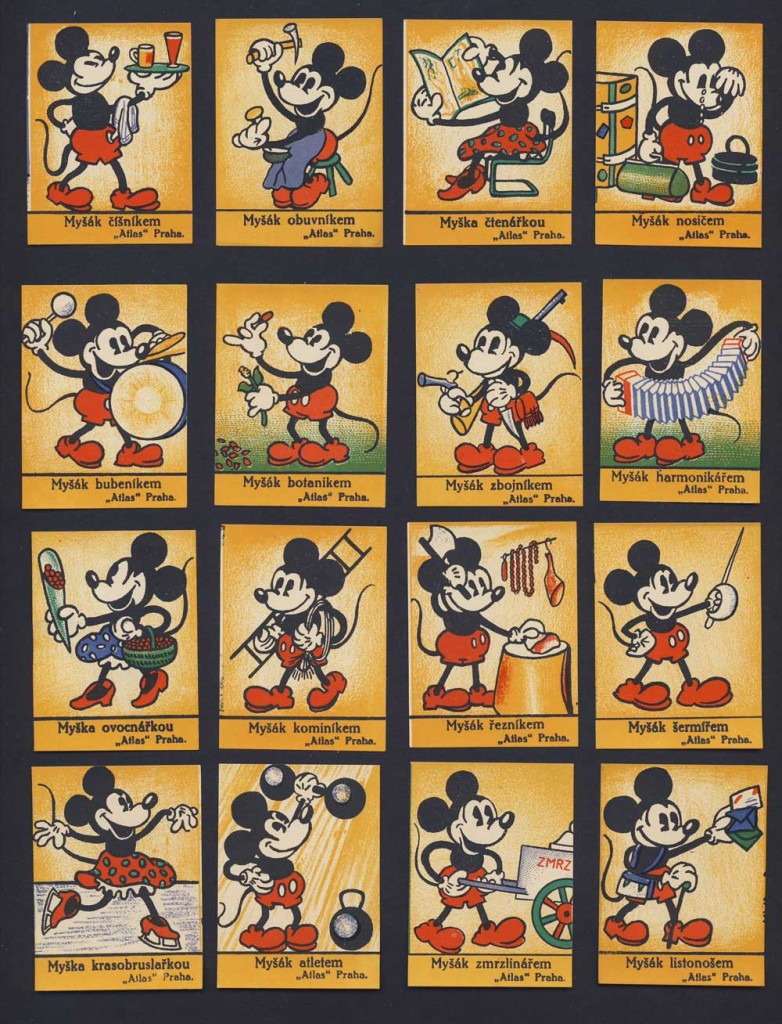 This ultra scarce Large group of 41 cards measuring each 1.75×2-3/8″ are made of glossy thin paper. Issued in the 1930s from Prague  Czechoslovakia. On the   Bottom margin of each card is featured text describing Mickey in assorted roles marked “Atlas Praha.” We believe “Atlas” is who issued these as one features Mickey w/box hung around his neck reading “Atlas” and he appears to be holding candy bars. The picture cards feature a wide variety of very interesting images.  What catches my attention with this series is how Mickey is displayed in regular life, drinking a beer and smoking a cigar, shaving, digging a grave, riding a horse, as night watchman, waiter, dumping a bag of coins, catching a butterfly, playing tennis, lifting weights, repairing a shoe, painting, as a butcher, apparently leaving town and crying, not the whimsical character we normally see him portrayed as.

While it may never be known the exact age, you can bet it’s a shoe in for most obscure and challenging to locate.  The famous Hakes Website, known for its incredible Disney Pre-War finds, had this to say about the one  series it didn’t find several years back, “It was the first example of this rare series in all their years of business it had even seen or come across.  That set was special also for one other reason, its condition.  It was in Mint condition, that truly sets it apart from many of the issues from that time period.

The current J.L. Tiedmann’s Cigarettes Mickey Mouse Card Collection being offered on Ebay this week has a opening bid of $7,499.00.  It will be interesting to see if collector’s sign on to make Card collecting history for this rare find. Will it break the 10,000.00 barrier?  Will it sell for the base asking price?  Will it be left untouched?  Only time will tell, one things for sure though, it’s no longer hiding in obscurity as it once did.  For that Mr. Neelson we applaud you as each new find furthers the cause of pushing the boundaries both mental and physical with what can happen when a collector pushes him or herself to excellence.

As William Shatner’s of Star Trek fame used to say at the beginning of each of the original TV episodes opening credits their purpose was:

“Space: the final frontier, these are the voyages of the starship Enterprise.  Its five-year mission: to explore strange new worlds, to seek out new life and new civilizations, to boldly go where no man has gone before.”

I like to think that his mission statement is not that much different from this website’s:

to explore strange new Global Markets, to seek out new rare finds and new collecting arenas, to boldly go where no Collector has gone before.

This is Tomorrow’s Gems Signing Out.