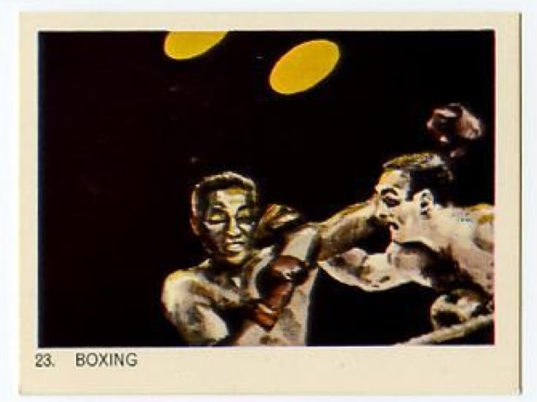 Well I’ve finally had a chance to free myself of most of my summer commitments and finally have some time to begin my long awaited new pet project, a new  Collector’s Blog!  Well it’s fitting that my first sport’s related article (hope to have more frequent write ups), is on one of my favorite and most recognizable sports legend of this era Muhammad Ali, AKA Cassius Clay.  Like most international issues, each comes with its own interesting origin and historical significance. Heinz the maker of various food products back in the 1960’s enjoyed the favorable marketing past time of marketing its food products by the occasional “Premium endorsement” which traditionally came is such fashionable forms as giveaways. For the purpose of this article I am focusing solely on premium trading card inserts. Trading or conversational interest cards are not by any means new to the collecting industry.

American Food Company’s like Post Cereal, Kellogg, Kahn’s, Cracker Jacks (one of the most famous), traditionally provided free incentives like toys & cards for the young kids of that era to incourage them to buy their products. Nothing like a screaming kid at the checkout isle to convince you that the trading card included in the package will some how make life more worthwhile if you buy it.  1964 was particularly of interest to many food producers, as it was once again time for the heralded Global phenomenon event “The Olympics”. Held in Tokyo, Japan, it heralded many stars from around the globe. What better way to market food distributors then to include Olympics memorabilia in the form of randomly inserted trading cards one could collect and trade?

Now for those of you new to the international art form of collecting cards, you will find one very dramatic difference between American collecting habits and those abroad. Overseas collectors where not as concerned with collecting “MINT”, state issues. In fact, gluing cards was a very prevalent custom. Imagine finding a Mickey Mantle RC glued to a memory book? Brings tears to the eye just thinking of it. From: Rowing, Track & Field, Swimming, Wrestling, fencing and boxing just to name a  few. The Boxing card, which is the key issue of interest, is a rare find which paid homage to by this time, the early pursuits of a then relatively unknown “Cassius Clay”.

Being an Australian issue, it was only available in regions of Australia and only for a limited time period while supplies lasted to help promote the 1964 Olympic Games. Now being an Australian issue, it was a natural that the producers would endorse and promote their own country’s champs, and there were quite a number of great champions, Dawn Faser the Olympic Gold Medalist being one of the most endearing to name a few. Another 1960 (Australian) up and coming (Boxing) star was Tony Madigan. What makes Tony so special you might say?  Well Tony fought a relatively unknown American hopeful Cassius Clay in the Boxing Semi-Finals which Clay would ultimately win and then move on to win Gold for the USA. This classic fight pose card #24 from that Olympic Series showcase a classic image of these two warriors in battle.

This issue is by far the rarest and least known of the Cassius Clay issues that can be documented, confirmed and related to a traditional definition of a standard trading card.

[This is another topic for discussion which I hope to touch base on and hopefully debate in more depth regarding “What is considered a trading card”?]

[There is another Australian rare Olympic card of Cassius Clay that I will touch on in a future write up, but back to the 1964 Veb Egg issue. ]

A very interesting note to mention is that Heinz was an Olympic Sponsor in 1964 for the games in Tokyo. So unlike some issues that came out during the 1960’s of Clay, which were for the most Blank back in nature, this issue had a traceable origin, finding it of course is another story. Finding it in excellent state of better is almost impossible.  To give you an idea of how rare this issue is a rare example of one showed up on EBAY some years back which had a very bad corner crease on the card and even with this substantial damage it netted over 600.00 dollars for a final closing price of 615.00 dollars.

Imagine what this rare find would net in a PSA holder grading 8 or better? The current PSA population report shows only 8 examples ever graded of this rare find none higher than a PSA 8 near mint to mint state. That particular example is the only known high grade example  currently ever recorded.  Imagine having the entire original series in that state, what premium would you place on this rare set?  Half of the verified graded examples never graded higher than a PSA 2 Good state. The grading card standard practice by PSA is a 10 point grading system with 10 being Gem Mint as perfect as it gets.  Ali Memorabilia hasn’t begun to come close in realize potential from a trading card perspective.

Interesting point of further interest is that back in 1964 the maker of these cards offered a collectible album and Olympic Program for these great issues. The price? All you had to mail back to get this rare issue was a label from a can of Heinz Baked Beans or Spaghetti and a stamp, go figure! 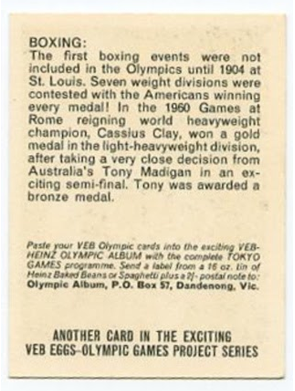 So going back to the concept of overseas collecting habit I wouldn’t be surprised if the few that survived the test of time are now permanently glued to an album some were in some garage or attic!  It’s a classic find that will only continue to garner interest and excitement in the collecting market. Consider it wasn’t that long ago that many perceived the 1971 United Kingdom Barrett Goldflake Issue “Famous Sports Men” as Ali’s true Rookie card. The PSA Sports Market Report Price guide still reflects a current book value for the 1971 issue at 1,250.00 for a PSA 9!

I beg to differ but it just goes to show one true statement which is early international collectible cards of the Champ are way below their market potential. Ali is hands down the most talked about, imitated and respected icon of his sport.  Many feel hear transcends the sport of boxing and is one of the most significant sports legends of this century. As such it will take time, perseverance and education, lots of it to bring light to this stars rare collectible trading card finds. When it finally hits the main stream you can expect it to be one of his earliest and rarest finds to locate, the must have of every top collector’s wish list .